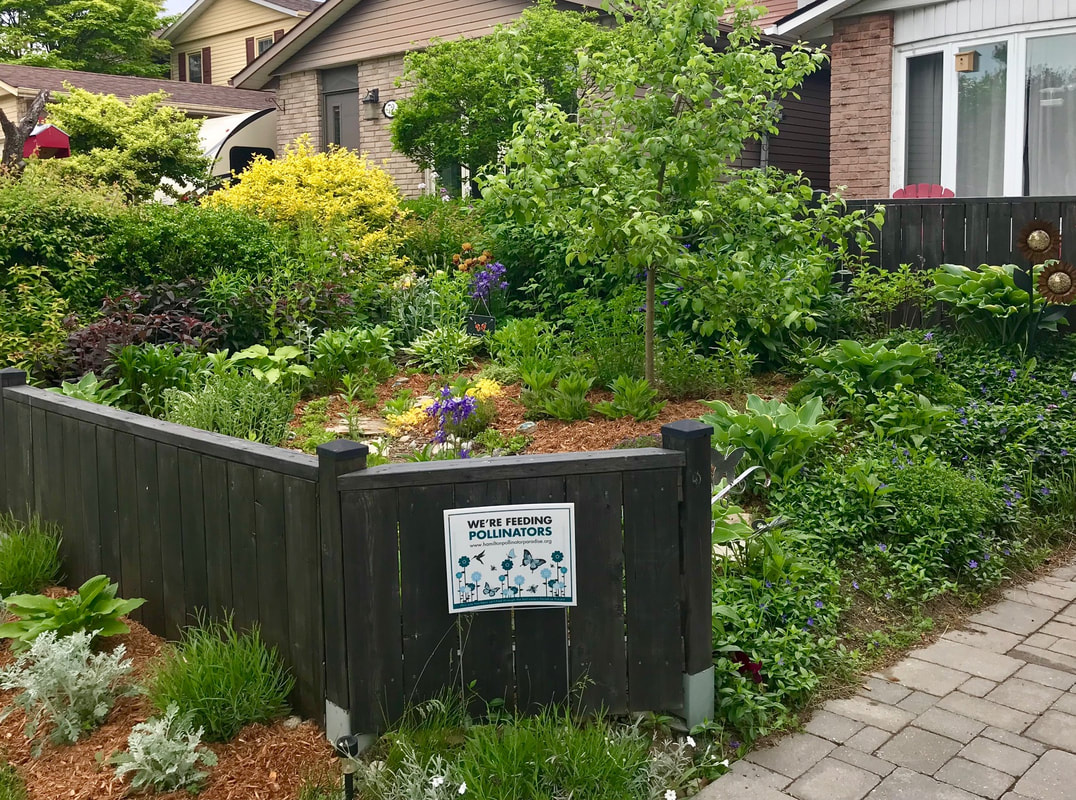 Kate Geroux has earned her Monarch Award 2019, having graduated up from the Caterpillar Award she received a few years ago: “that was a baby garden with donated plants.”
New to the Stoney Creek neighbourhood, Kate says, at the time, she had just heard about the awards and was getting to know the soil of her garden.
“It was a blank slate, there was nothing there,” she recalls, “rocks, rubble, not even any grass.”
The soil being mostly gravel and clay, Kate’s work was largely about improving it; applying peat moss and compost from the school she works at, as well as bringing in Red Wiggler worms to help break things down and applying topsoil. A slope garden, Kate was concerned about plants getting washed away with the rain. Her solution was to create a walking path with rocks from the beach and drainage with pebble stones.

The family started backpacking plants home, rescuing many from sites that were being torn up for development (unfortunately, invasive plants hitched a ride too). The children would carry a wildflower book with them and match the flowers, pointing them out, intent on saving them;“they would stop their bikes and yell to me ‘look, there’s Jack!’ for Jack in the pulpit,” Kate remembers. “It was tough. The children became attached to these spaces, only to see them destroyed.”
She is comforted knowing that her children will now fight for those things they love.
It is this love and appreciation of nature that Kate passes on to the children she comes in contact with, through her various roles (she is a Registered Early Childhood Educator (RECE), and a Certified Forest School Practitioner, and facilitator of “The Woodland Program” for children ages 0-6 and their families through the Boys and Girls Clubs of Hamilton, in partnership with Green Venture).
​Kate, herself learned to appreciate nature because of the influence of her mother; at a young age, she could already name many wildflowers. For Kate, 2019 was really getting to know her native species plants even better, and “knowing who the mimics are. It’s a process, we are learning as we go.”
Kate is always considering the children in the neighbourhood who come to visit, keeping them in mind in all her planning. She has raspberry bushes and has planted an apple tree as well, and she encourages the children to pick them; “it gets them in the garden and that is magic in itself.” Kate has also hidden painted rocks, fairies and gnomes for them to find. ​

What do the neighbours say?
Being a new neighbour on a corner lot house, Kate says people get to know you: “many people stopped and asked if they could help us. They would see me and my backpack and were intrigued.”
She leaves baskets of seeds and milkweed on her porch for people to help themselves. She also has a mini kitchen garden on her front lawn with tomatoes, herbs, calendula and more. These too, she places in baskets on the fence for neighbors to take.
She offers tours of her garden to encourage her neighbours to follow her example and plant for nature.
“It’s an athletic neighbourhood, people walk and run a lot,” Kate says, “so a bench is needed for people to stop and relax and view the garden.”
This growing season is the year where she plans to put in “pots of colour.” Most of her plants being rescues and giveaways, and gifts, this year she will be doing labels that tell people what the plants species are, the goal being a 70% signed garden.
Kate is also planning to expand her garden into the adjoining boulevards since she maintains them already. With the children, she will be doing regular plant giveaways, “like with a lemonade stand, free to a good home.”
We look forward to hearing back from Kate, later on this year!