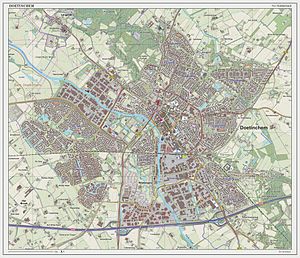 listen); Low Saxon: Deutekem) is a city and municipality in the east of the Netherlands. It is situated along the Oude IJssel (Old IJssel) river in a part of the province of Gelderland called the Achterhoek . The municipality had a population of 57,555 in 2019 and consists of an area of 79.66 km2 (30.76 sq mi) of which 0.61 km2 (0.24 sq mi) is water. This makes Doetinchem the largest town (by population) in the Achterhoek.

On 1 January 2005, a municipal restructuring merged the neighbouring municipality of Wehl as well as the Zelhelmse Broek area with Doetinchem.

The local government organization in the Netherlands is complex and fine-grained (see municipality and Govt Stats,[5] with municipalities being divided into various entities. The