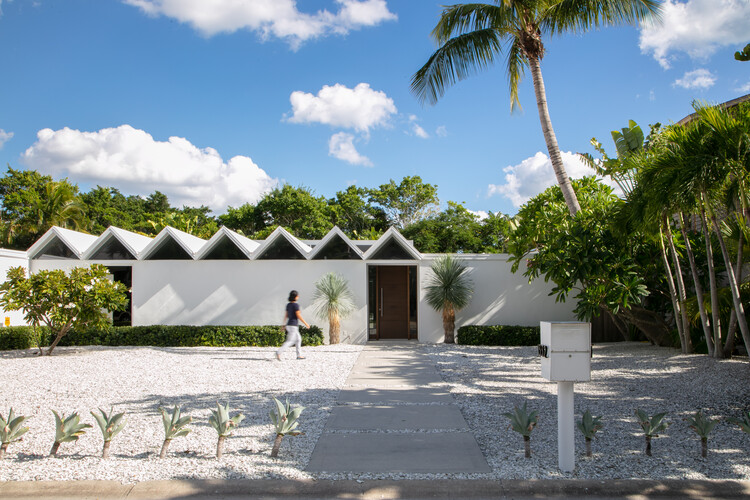 Text description provided by the architects. This unique mid-century modern house from the office of Ralph Twitchell suffered years of modifications and neglect. Doors and windows between inside and outside and doors between rooms, including bathrooms, had been removed. The original carport was closed in with sliding glass doors and an awkward storage area was added behind the master bedroom.

A patchwork of different floor materials occurred throughout the house and the floor of the main space was coated with an opaque black stain continuing out to the pool deck contiguous with the interior due to the removal of the original sliding glass doors. Some of the original stack-bond block walls inside and outside were covered with other finishes while other areas of the block were still exposed.

Essentially, the house had become a patchwork of incompatible materials and unfinished ideas, both interesting and ill-advised. Fortunately, the unique roof structure made of Pickett panels in a “V” formation, was still present and was in reasonable condition.

The new owners decided not to restore the house to original condition due to the loss of square footage that this would require. Ultimately, the goal for the renovations was to bring into focus the unique and interesting aspects of the original mid-century design and to bring a cohesive aesthetic and organization to the house, along with air-conditioning, still lacking after the many years of modifications to the house.

New windows and exterior doors were installed where missing, and as replacements for others so that all would match. The pool cage, not original to the house, was replaced with a taller cage that aligns with the walls of the main interior space and allows the roof edge to be unobstructed. Extraneous interior and exterior elements were removed, and a new exterior hardscape was added. Bathrooms were reconfigured and skylights were placed above showers to introduce natural light into these small dark rooms.

With a low flat roof structure on each side of the main space and no attic space, strategies for air-conditioning the house was integral to the solution for the house. Hallway ceilings were dropped 12 inches along with a couple of other areas carefully worked into the design in order to provide pathways for air distribution. Casework is integral to the air-distribution strategy with pathways concealed at the top and behind where needed and return air through toe-kick areas in some places.

The original stack-bond block walls, which were covered with other materials, were damaged and unable to be restored. To achieve a consistent aesthetic inside and outside the house, wall finishes were replaced or added as needed. The patchwork of dissimilar flooring materials and substrates was covered with an integrally colored thin concrete topping. Interior doors and door jambs were added, and others replaced, to achieve a consistent interior aesthetic.