Collect every Boatman Coin in the Boatman’s Labyrinth.

Notes: This is a bit trickier than it sounds. The Boatman’s Labyrinth is technically accessible from the moment you finish the first Chapter, Dethroned, and access the Void. Simply head towards Dis’ shop and go through the large door at the back. You’ll get to collect the first coin immediately, but every other one will require you to complete a side quest during a main Chapter of the story, ranging from the destruction of the two ballistae in the first Chapter, to the collection of gold ingots in the third Chapter, Inferno Vault.

Let’s start with a map of the place: 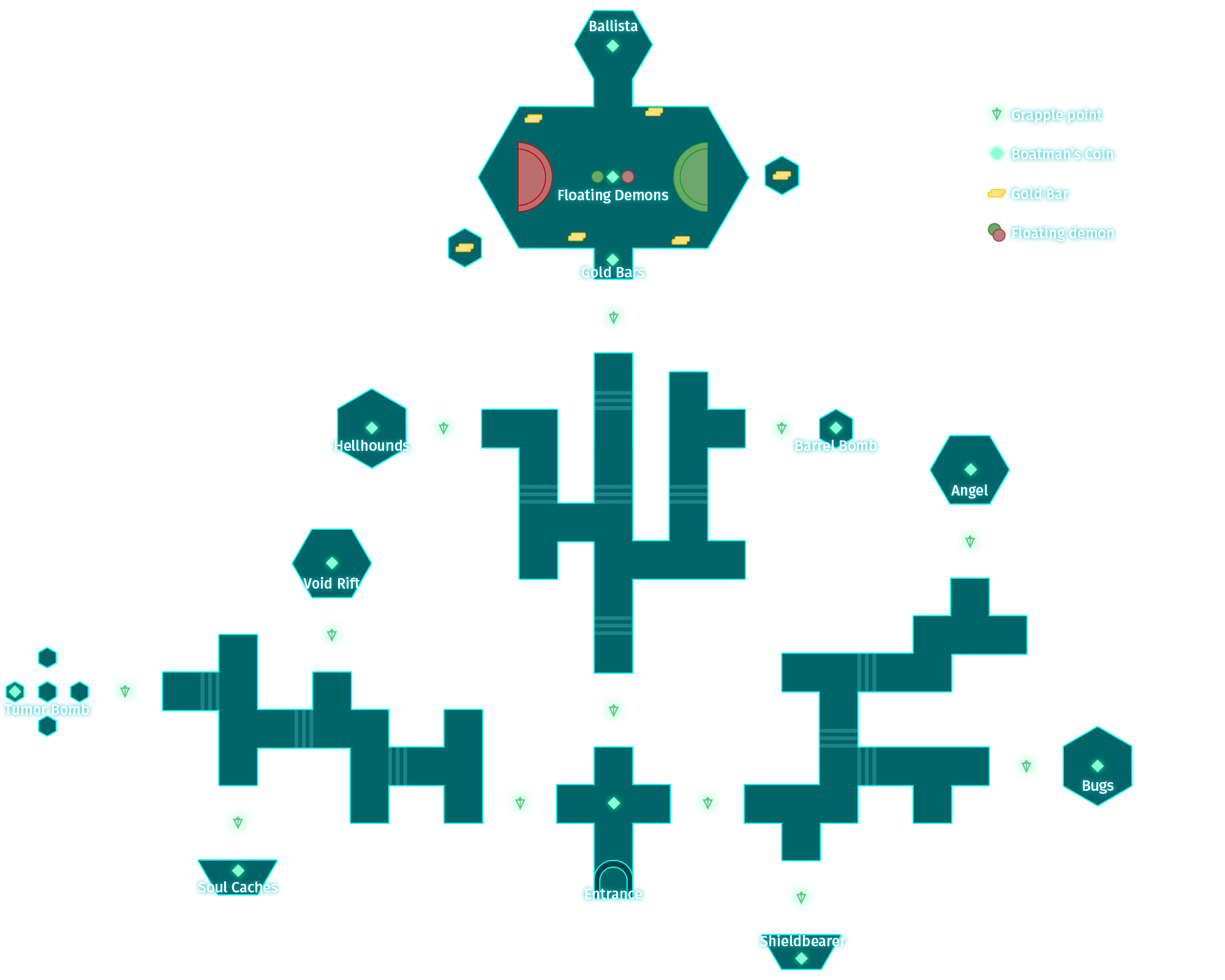 You’ll notice there are twelve Coins in the maze in total, despite there being eleven Chapters with optional objectives. That’s because the first coin in the Labyrinth, right at the entrance, does not count towards the achievement and is available from the start. Here’s a list of the objectives you’ll have to complete before the coins become available:

Ballista – Chapter 1, Dethroned : “Engines of Destruction” Destroy the two ballistae attacking Samael’s fortress. They’re both found a bit outside the beaten path, but nothing crazy.
Once the objective has been completed, head to the newly spawned ballista in the Boatman’s Labyrinth and fire it three time. It’ll explode and the Coin will spawn.

Soul Caches – Chapter 2, The Slag Pit : “Open the Soul Caches” Find and destroy every Soul Cache in the Slag Pit. You can check out the “Soul Cache” section of this guide for an easy time.
Once the objective has been completed, head to the Soul Caches Island in the Boatman’s Labyrinth and simply blow them up to spawn the Coin.

Gold Bars – Chapter 3, Inferno Vault : “Hell’s Forge” Find and collect every gold ingot in the Inferno Vault before bringing them to the Forge and activating it. You can check out the “Hell’s Forge” section of this guide for an easy time.
Once the objective has been completed, head to the northern island in the Boatman’s Labyrinth, and collect the six newly spawned gold ingots. The Coin will then spawn at the entrance of the Island.

Hellhounds – Chapter 5, The Hoard : “Cruelty” Find and kill the Houndmaster in The Hoard. This requires you to enter the Hoard through the secret entrance that is found south of the main gate, and to kill the Houndmaster itself. This does not require you to kill less than five hounds, as that is another achievement entirely.
Once the objective has been completed, head to the Hellhound Island in the Boatman’s Labyrinth, and…pet the dogs. You’ll have to pet them in the correct order, shown below. They’ll emit hearts if petted correctly. With all good doggos satisfied, the Coin will spawn. 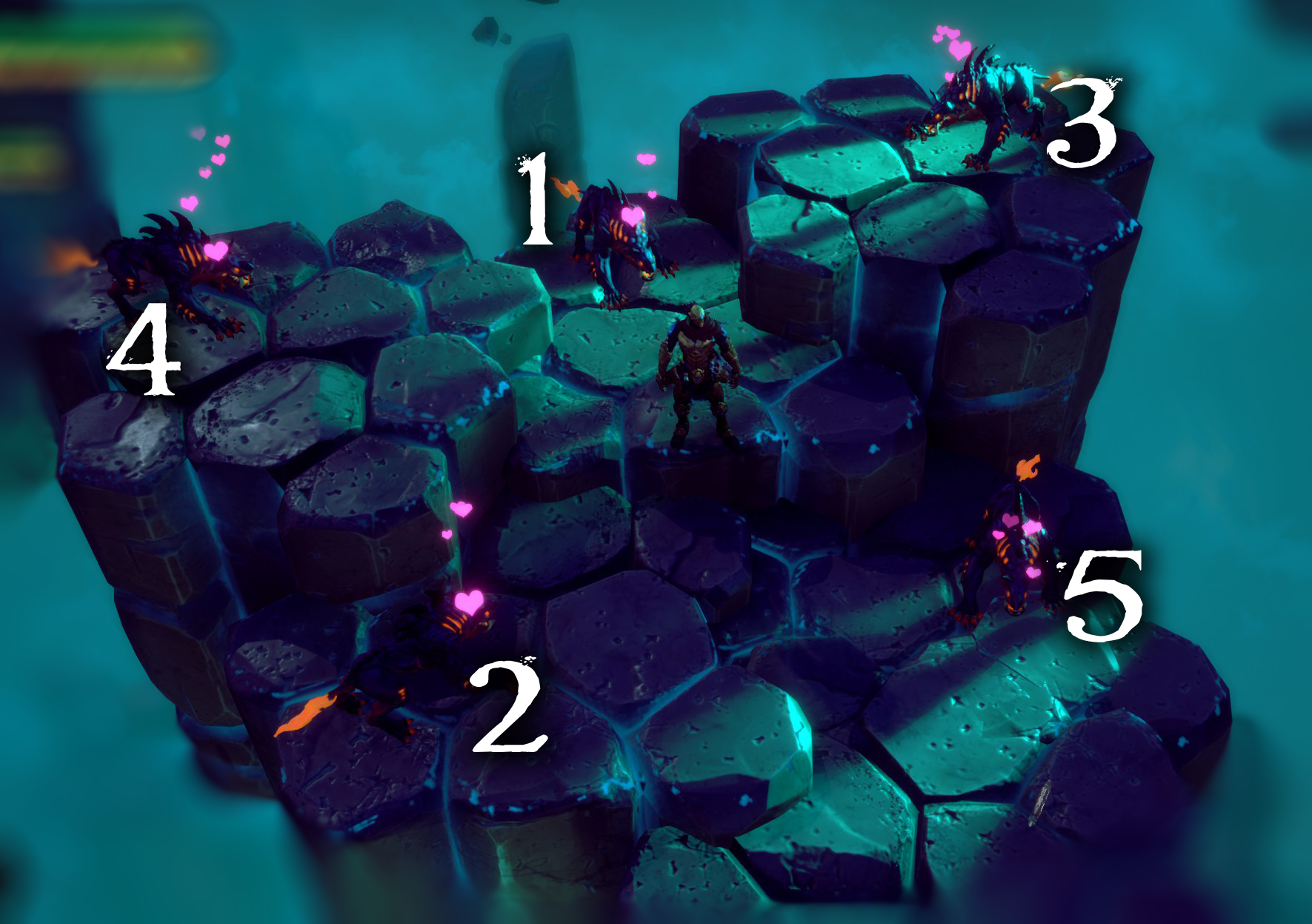 Shieldbearers – Chapter 7, Decay : “The Dead Court” Find and kill all three Dreadwalkers in Decay. This can technically be missed, as only two of the three Dreadwalkers have to be killed for the Chapter to be completed. You can check out the “The dead court” section of this guide for extra details.
Once the objective has been completed, head to the Shieldbearers island in the Boatman’s Labyrinth, and glide over the three Skeleton soldiers to collect the Coin.

Floating Demons – Chapter 8, The Holdback : “Staunch the Flow” Find and turn every valve in the level before heading back to find out what lies at the bottom of the lake of corruption.
Once the objective has been completed, head to the northern island in the Labyrinth, where two floating demons have now spawned. Push them around until you get them into their respective goals, and the Coin will spawn in the center of the island.
Here is a video for the locations.

Angel – Chapter 11, Bastion’s Fall : “Good Deeds” Save the uncorrupted Angels in the Bastion. You can check out the “Good deeds” section of this guide for an easy way to save them.
Once the objective has been completed, head towards the Angel in the Boatman’s Labyrinth, and simply interact with them to get the Coin to spawn.

Bugs – Chapter 12, The Maelstrom : “Infested” Defeat the Grub Queen in the Maelstrom. This is accomplished by trashing all three bug nests in the level, which causes the queen to spawn. Simply kill her and the quest will be marked as completed. You can also check out the “Infested” section of this guide for more details.
Once the objective has been completed, head towards the Bug Island in the Labyrinth and squash all of them, using guns, swords and feet. With all of them dead, the Coin will spawn.

Tumor bomb – Chapter 14, The Dredge Works : “Saboteur” Destroy every mining drill that powers Moloch’s mining operation. This is accomplished by first finding the drills themselves out in the desert after the barricade, and then hitting them with a growth bomb to make them explode. There are three of them, all of which are easily visible on the map with their rectangle shape, and there’s usually a growth bomb available nearby.