’s south coast is known for its spectacular homes.
After Gates’ estate, the most popular LW mansion viewing site is the cove
northwest of Groat Point. This is the location of the “Windows 2000 House,” “T-Rex
House” and “Their Art House.” 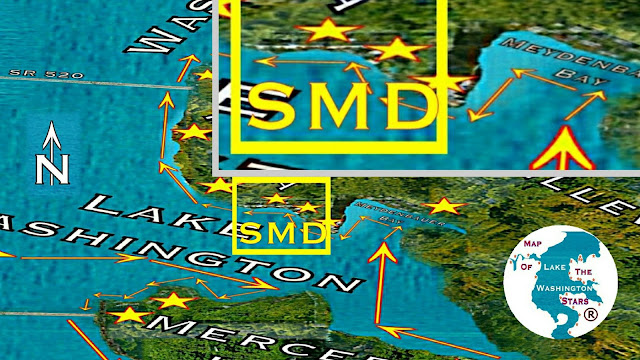 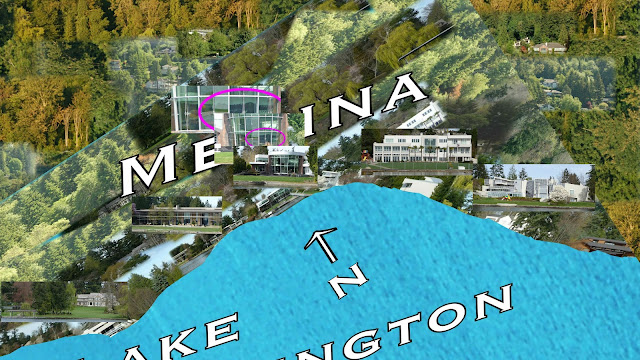 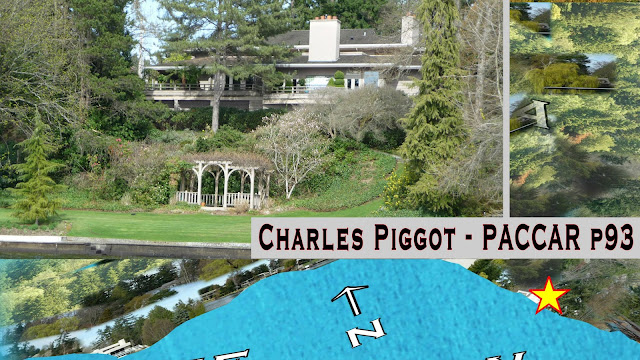 This
mansion is 10,250 sq ft on 0.96 acres with 120 feet of waterfront. It is the
home of Charles M. and Yvonne Pigott.
Charles was President and CEO of Bellevue-based PACCAR, Inc. He led the company from 1965 to when he retired in
1996. PACCAR is now recognized as the truck manufacturing world leader and has
numerous manufacturing facilities in the greater area. The company was founded by Charles’
grandfather, William Pigott, Sr., in
1905. Charles’ son, Mark Pigott
(page 113), became Chairman and CEO in 1997. 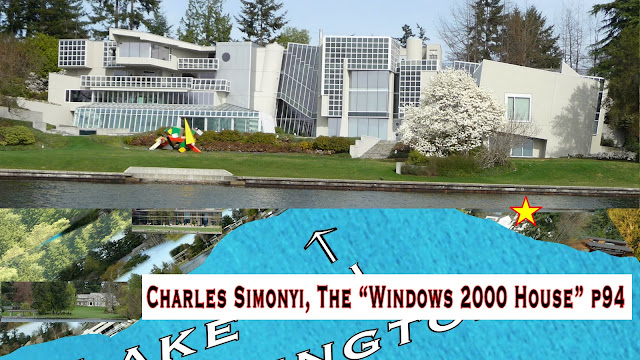 Former Microsoft executive, Charles Simonyi, owns the mansion which has more windows than any
other home on this lake. The house picked up its name when Microsoft introduced
Windows 2000. Charles Simonyi is a
Hungarian-born former Microsoft executive. His former girl-friend, from the
1980s until 2008, was Martha Stewart.
He later met Lisa Persdotter, a
Swedish socialite, and they got engaged on . He was 60 and she was 28 at the time. Their wedding
in , following three days of celebrations, was attended by neighbor Bill Gates. Simonyi was one of the
initial commercial astronauts and the first commercial outer space frequent
flyer. The mansion is 19,000 sq ft on 1.3 acres with 300 feet of waterfront.
(For more information see Seattle
Mansions May 2011 post and pages 4 and 94). 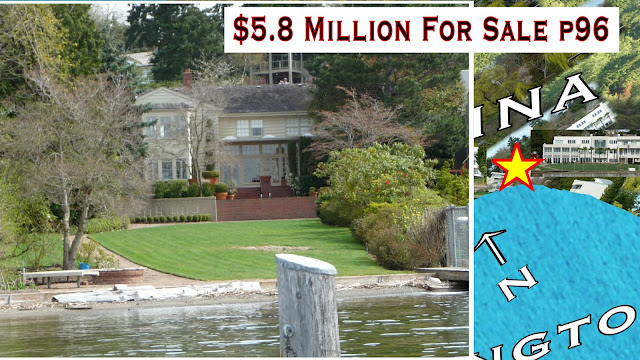 This property was listed at
$7.9 million in 2009, $6.5 million in 2010 and $5.9 million since 2011. It is
listed by Wendy Lister and Kirsten
Paulsen, CBBain. “Platinum lakefront…southwest Gold Coast. Unsurpassed
wade-in waterfront. Summertime marine amphitheatre…growing up or slowing down
fitness rowing…sailboats in the bay…genius pool setting. Acknowledging
classic sensitivity: full coach house with kitchen, terra cotta morning
courtyard, French doors; solarium; shutters, knot gardens. A generation home saluting its giant
neighbors…retaining the irreplaceable charm of the past.” This home is on
page 96 in LW 130 Homes. It is nestled in ’s southwestern cove between some of the area’s most
spectacular mansions. It is owned by David
and Judith McGrath and has 6,200 sq ft of 0.6 acres with 42 feet of
waterfront. 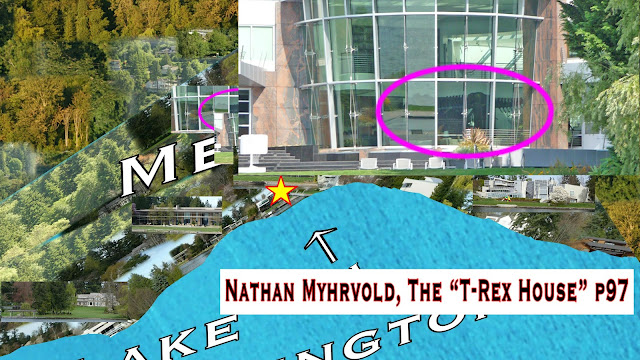 Another former Microsoft
executive, Nathan Myhrvold, owns the
T-Rex House (page 97 and Seattle
Mansions 2/22/10 post). Nathan used some of his Microsoft multimillions to
fund a dinosaur bone digging foundation. Inside the big rounded windows of his
living room you can see one of the t-rex skeletons he helped dig up. He
co-founded Bellevue-based Intellectual
Ventures in 2000 and the company has been featured in recent news. He is a
prize winning nature and wildlife photographer and a master French chef,
occasionally working as an assistant chef at top-of-the-line restaurants. The
mansion is 19,600 sq ft on 2.0 acres with 115 feet of waterfront. 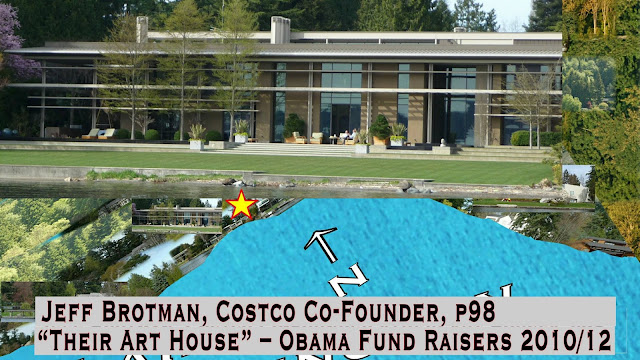 Costco
co-founder and Chairman, Jeff and Susan Brotman
own the mansion (page 98) known as “Their
Art House” that includes monumental art pieces. The louvers on the front
(water side) and roof of the house adjust to provide the optimum natural light
on the extensive art collection. Jeff and Susan Brotman hosted lunch with Michelle Obama at their mansion on (see Seattle
Mansions 10/24/10 post). The $7,500 per plat lunch was a fundraiser for US Senator Patty Murray’s (Democrat
Washington) reelection. President Obama
returned to the Brotmans for a $17,900 per plate fundraising brunch on (2/9/12
Seattle Mansions post). The mansion is 11,500 sq ft on 2.35 acres with 215
feet of waterfront. 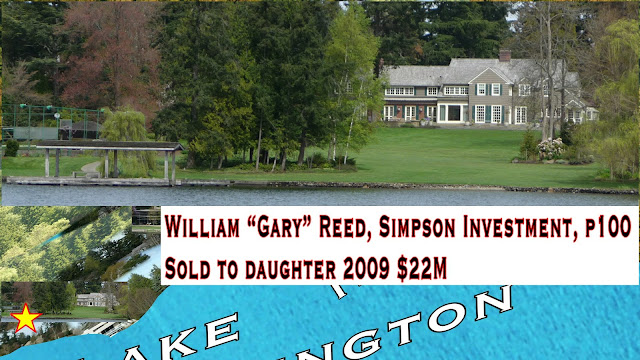 William G. “Gary” Jr. and Victoria
Reed sold their 8,600 sq ft mansion on 5.35 acres with 305 feet of waterfront
(page 100 in Lake Washington 130 Homes) in September 2009. The estate features
a waterfront tennis court and fabulous lawns and gardens. They moved to their
new mansion in Madison Park. This and the Bezos’ property at 5.35 acres each are the largest waterfront properties in . See Seattle Mansions Blog for the sale
and new
mansion. The recorded buyer was Blue Water Realty LLC whose principals are ’s son and daughter, Doug
Reed and Sarah Reed. is the retired Chairman of Simpson Investment. He is the grandson of Mark Edward Reed who is the first of the Reeds to run Simpson
Investment that is owned by the Reed/Mosley families. grew up on the Reed Estate in Madison Park that was
the early 1900s LW waterfront estate that was larger than the current Gates and Allen compounds. The estate was subdivided into nine lots and Howard Schultz is the most prominent
resident on the old estate. (see
4/23/12 post). 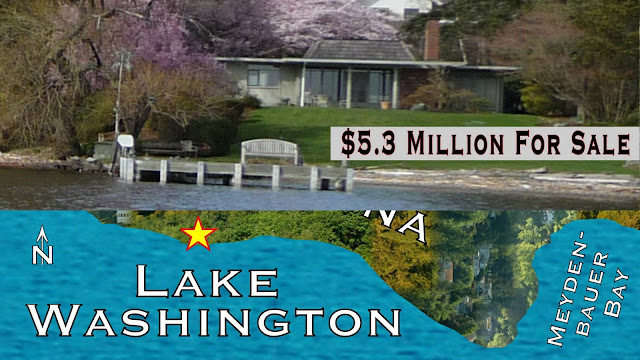 This home was listed for $5.9 million
in 2012 and lowered to $5.3 million in 2013. From the listing by Leo Van Hollebeke and Tere Foster, Windermere:
“Expansive views & privacy in the heart of . Enjoy 105 ft of south-facing beachfront, looking out
to snowcapped mountains, , & nearby
cities. Sited on almost 3/4 of an acre, mature lawns provide privacy for the
ultimate in serenity & quiet. Clean lines & walls of windows reflect
sparkling blue waters in this mid-century modern rambler. Entertain on the view
patio leading out to the private dock. A once-in-a-lifetime opportunity on one
of the most desired streets in .” The home is 3,120 sq ft on 0.7 acres with 105 feet
of waterfront. It is owned by John R.
Biddle. He acquired the property from the estate of his mother, Mona Louise Biddle, when she passed
away in 2011 at the age of 85. Her deceased husband, Brooks Biddle (1924-1999), was the founder of Bothell based Brooks
Biddle Automotive, Inc. and a well-known football player at UW.

sustainability in the bathroom [Video]