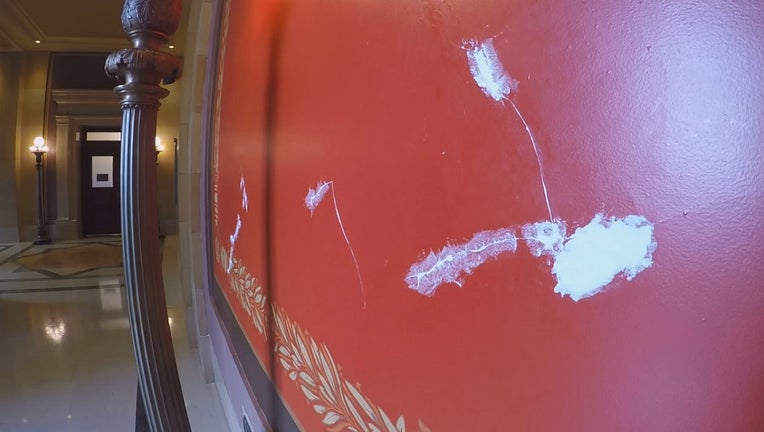 ST. PAUL, Minn. (FOX 9) – Turns out, the $300 million restoration of the Minnesota State Capitol wasn’t the end of the repairs.

Five years after the renovation ended, the state is now spending $1.3 million to fix decorative paint and plaster throughout the building. State officials cited a series of reasons for the issues and say humidity in the building may be worsening the problem.

Five years after the renovation ended, the state is now spending $1.3 million to fix decorative paint and plaster throughout the building. State officials cited a series of reasons for the issues and say humidity in the building may be worsening the problem.

“We shouldn’t be alarmed that the paint’s all falling off. It’s not. We’re just taking care of it where it’s distressed,” Chris Guevin, the state’s facilities management director, told the Capitol Preservation Commission on Tuesday.

The state contracted with John Canning and Co. of Cheshire, Connecticut. Crews have been working throughout the building, and white plaster patches are evident on several walls and ceilings. They will take a break during the 2022 legislative session that starts in January and finish up the work by July.

The plaster and paint last got fixed in 2016 during the Capitol restoration. Regular care is needed because of water infiltration, vibrations, expanding and contracting, and humidity, Guevin said.

The state is studying how much humidity is playing a role.

“This is not something that’s an anomaly. We knew when we restored the building that within a few years we’d have to come back and take care of the paint,” Guevin said, predicting more work would happen in another five years.

A new report on the Capitol’s condition indicates the building is otherwise in excellent structural shape.

State Sen. Dave Senjem, R-Rochester, asked whether the state has enough funding to maintain the building after taxpayers “basically provided a new Capitol, as new as it can be at least.”

Guevin told commission members that the state is hoping to avoid any major projects for another 10 years.

Much bigger project likely ahead

The paint and plaster repair will be tiny compared with a looming project across the street.

The state is seeking design plans and project costs for a rehabilitation of the 89-year-old State Office Building, where House lawmakers have their offices. The building has undergone major repairs in recent years.

The work will involve significant security fixes but may be much more expansive than that, Administration Commissioner Alice Roberts-Davis told the commission Tuesday.

“I don’t think it will be anything nearly as comprehensive as what we saw at the Capitol because that was an internal and external renovation,” she said.

Proposals are due Monday.