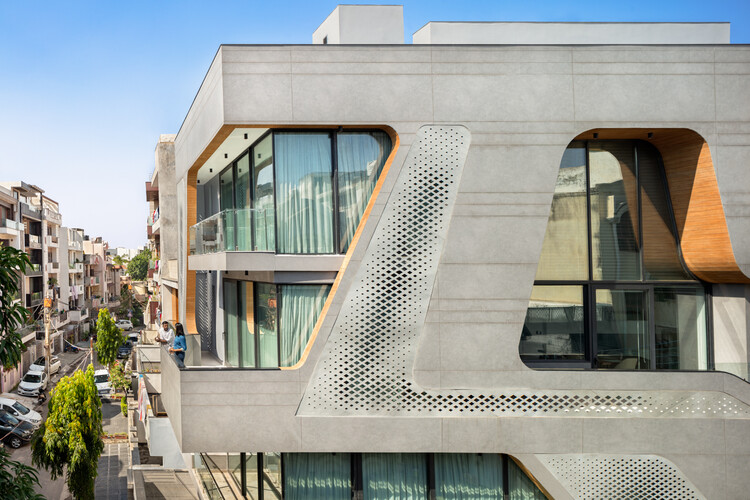 Text description provided by the architects. Scoop House is a monolithic, three-storied residence that responds to the idea of contemporary urban living through sensitivity to context, style, and innovation in construction. Set amidst the tight urban fabric of Delhi, the modern house exhibits uniqueness in its form, by means of a façade that discounts the more popular orthogonality. The client’s western aspirations called for a modern outlook in designing for a family of three, over a linear plot of 180 sq yds. A context-sensitive approach has been adopted in contrast to the existing unvaried street form and architecture of the neighborhood that poorly responds to the existing community garden. The compactness of the site demanded verticality; hence, the south-east facing house is intended to be a monolithic block/cuboid with carved curvilinear facades. A large tree canopy in the community garden on the rear/north-east side forms inspiration for the curvilinearity. The scoops in the facades that the house derives its name from, help to break the scale and render a sense of softness to the building and its otherwise rigid context.

The design of the house is articulated through the varying levels of privacy, arranged in an ascending order – public, semi-public, and private. The design scheme is largely driven by combining three important factors: visual connectivity, natural daylight, and ventilation. To enhance the dynamics of the three inhabitants in a vertically-zoned format, it is important to enable visual connectivity across floors – and hence, an open connected environment for the family is crafted. Different levels have been achieved by splitting the house and the slabs with every mid-landing leading to an accessible, and very functional space. The overarching design idea facilitates the creation of volumes and views that allow deeper penetration of daylighting across the front and from the garden. With double-height volumes, almost 70% of the entire house is visually permeable from various viewpoints, while providing openness, yet maintaining privacy. The result is an interesting interplay of spaces that flow into each other, while embracing daylighting and ventilation. All the levels of the house employ strategic zoning to hold living areas predominantly on the north-east zone and sleeping areas on the south-west. Sleeping areas become buffer spaces to prevent heat gain during daytime. Additionally, the zoning and the splitting of volumes help hot air rise from within, thereby regulating the micro-environment through a stacked ventilation system.

As one is led into the house on the upper ground floor, the visitor is treated to brass décor that is etched on the wall, adding more vibrancy to the flow of transition. The mid-landing of the staircase opens into a guest bedroom, levelled below the recreational space on the upper ground floor to create a heightened lounge area. Flanked by huge circular columns that exhibit a scale of grandness, the lounge and the bar is laid out with immense daylighting from the south-east for visitors. The following mid-landing further opens into a double-height lounge area that sits above the guest bedroom below. The lounge holds expansive views to the community garden on the north-east and direct accessibility to the kitchen-cum-dining space levelled above. Two master bedrooms with balconies are strategically placed one above the other on the south-west as per thermal considerations. Balconies on the south-west act as buffers and diffuse the amount of southern radiation entering the two bedrooms. The mother’s master bedroom with the balcony catches a glimpse of the neighborhood on the north-west. The topmost floor is dedicated to the siblings and accommodates two naturally lit master bedrooms and a private family lounge.

A curvilinear façade is designed to break the monotonous orthogonal nature of the built context. A layered entity by itself, the design of the façade includes carving out scoops from the cuboid, which is an approach to curvilinearity. However, the primary challenge lay in achieving the form of the façade in construction – from a render to reality, wherein the choice of materials and execution techniques played key roles. Owing to the need of a thermal mass in the south zone, and as the perfection and the scale of the curve in the elevation was not achievable in normal masonry like brick and concrete, a multi-layered scoop/façade that does not add extra weight to the construction has been adopted. The layers from the outside to the inside include light-weight MS – laser cut for perfect formwork, dry-cladded by Ceraboard, then by 3mm thick Laminam porcelain tiles and further by Ceraboard again. The depth of the 2 ft wide façade element is shaped to the glass closures of the building envelope, making a cavity that acts as a double-skin layered wall, a dry wall that prevents heat gain in the house. An additional challenge was to achieve the curved edges of the windows throughout the house; CNC-cut jaalis of MS on the façade are strategically positioned along the bedroom to filter south sun and screen the house from the outside. Though complicated, the façade elements have been customized and laser-cut but erected by a local set of labourers who are exclusively trained to upgrade their skills.

In terms of the interior color palette, shades of gray, white and brown render lightness, earthiness, and neutrality to the spaces. Veneer is used as the main furniture material palette for beds, tables, bed backs, etc. reflecting warmth and richness. The house is designed to support environment-friendly systems – provision of solar cells, solar pumps and rainwater harvesting facilities that achieve maximum possible energy efficiency. The Scoop house sensitively infuses with a chaotic context yet stands out in the same. The design of the façade takes cues from the traditional deep arches of India and translates to today’s times with new-age materials and latest innovation in construction.