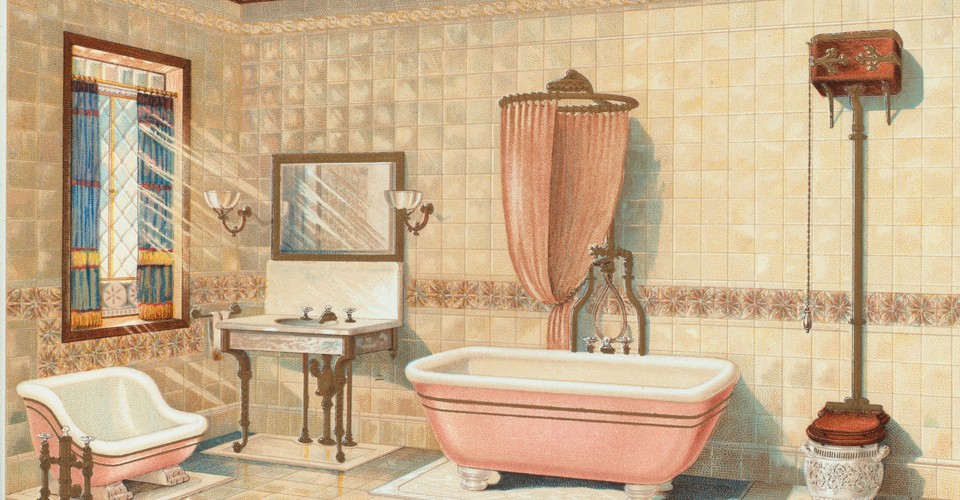 Cholera and tuberculosis outbreaks transformed the design and technology of the home bathroom. Will Covid-19 inspire a new wave of hygiene innovation?

If Lloyd Alter were building a new house right now, he’d be sure to add one unusual feature: a bathroom sink in the front vestibule. “We’re going to see a real resurgence of the vestibule, I think,” says Alter, a former architect and design historian who now teaches Sustainable Design at the Ryerson School of Interior Design. “This is a transition zone from the outside to the inside, where you take off your dirty stuff and you wash your hands before you go into the house.”

Alter predicted that disease-avoidance would rise to the fore of bathroom design a few years ago, when he observed the traumatizing effects of the 2003 SARS outbreak on Toronto, which killed 44 people. But home design in general — and bathroom design in particular — has long been influenced by infectious disease. This isn’t a linear narrative with clear causation, but rather a convergence of advancements in science, infrastructure, plumbing, sanitation and design trends. The modern bathroom developed alongside outbreaks of tuberculosis, cholera and influenza; its standard fixtures, wallcoverings, floorings, and finishes were implemented, in part, to promote health and hygiene in the home at a time of widespread public health concerns.

Now comes coronavirus, which could bring public health back as a primary home (and bathroom) design issue. Now that we’re spending so much of our daily lives scrubbing each knuckle and nail bed during those frequent 20-second hand-washing exercises, it’s not hard to imagine a renewed focus on bathroom innovation. Of course, ideas like sinks in hallways aren’t new: They were once a common fixture in tenements, although more as a cost-saving measure once indoor plumbing became the norm, not necessarily as a deliberate attempt to get people to wash their hands before entering their homes. It’s just one example of how health concerns have influenced how we live — something we are likely to see more of in a post-coronavirus world. And the bathroom, as ever, will be at the center of this movement.

In the beginning: water treatment and wooden fixtures

By the late 1800s, there were 136 public water supplies in the United States, along with a growing patchwork of sanitation and sewer systems in urban areas across the country.

This was a point after germ theory had become accepted and was in the process of catching on (with the help of early public health campaigns), but before the widespread use of antibiotics in the 1940s and 1950s. Crowded conditions and poor water quality and sanitation made cities fertile ground for a host of pathogens.

At this time, only the wealthy had indoor plumbing — first in the form of a tap in the kitchen, and later a small sink in the bedroom in place of their existing setup with a wash basin and pitcher, says Alter. There was no dedicated bathroom, and thanks to the widespread belief that “sewer gases” spread disease, even many upper-class urban dwellers opted for chamber pots and outhouses until around the turn of the century.

When chamber pots were still in use, those who could afford to do so stored them inside wooden commodes, or chair-like cabinets that contained the pot (which servants were in charge of dumping). “So when the rich built their first bathrooms, they encased everything in wood,” Alter says. Ornately carved dark wood surrounded the toilet, sink and bathtub, so they each appeared as pieces of furniture, masking their true purpose.

A focus on health and hygiene

The cover of a 1912 sales pamphlet from the Standard Sanitary Manufacturing Company (later renamed American Standard) features renderings of American bathrooms dating back to 1875. Though only 37 years had passed between the design of the two rooms, they are starkly different: the former covered in wood, and the latter not all that different from bathrooms as we know them today. “Ideas of sanitation and hygiene apparently unknown but a few short years ago have become so imbred [sic] in our daily lives,” the pamphlet reads, “that were we for any reason, compelled to forgo them, we would feel that we had retrogressed for centuries, instead of the only twenty-five to fifty years in which present day sanitation and hygiene have come into being.”

During that era, medical professionals realized — and then convinced the public — that indoor toilets connected to the public sewer system were far more beneficial to stop the spread of infectious disease. And as tuberculosis and influenza continued to kill indiscriminately among the classes, bathroom design evolved to help stop their spread.

The wood was the first to go, in favor of open plumbing fixtures, which were far easier to clean and more sanitary. Bathtubs, which were originally made of wood and lined with either sheets of zinc or copper, later featured enamel-coated cast-iron, a development introduced by the Kohler Company in 1883 as way to make their tubs and other products “superior, clean and hygienic,” according to Angela Miller, manager of archives and heritage at Kohler. Thanks to its ability to be easily wiped clean, enamel became the material of choice for the primary bathroom fixtures moving forward in both hospitals and private homes.

Bringing the hospital into the home

In the days before antibiotics, rest, sunlight and fresh air served as the best treatments for respiratory illnesses like tuberculosis and influenza. This was the idea behind the sanatoria where tuberculosis sufferers were isolated and treated. In his 2008 book, Light, Air and Openness, architectural historian Paul Overy lays out how many features of modern design originated in hospitals and sanatoria — structures that were purpose-built to combat the spread of infectious disease. This also included all-white patient rooms, which, he writes, “were designed not only to be easy to clean but to appear to be spotlessly clean — potent visual symbols of hygiene and health.”


Cities are changing fast. Keep up with the CityLab Daily newsletter.

The best way to follow issues you care about.

Homeowners soon adopted these design principles — particularly in the kitchen and bathroom. Fussy, stuffy Victorian bathrooms were the past; hygiene and sanitation were the future. This meant getting rid of anything that wasn’t easily wiped-down, washed, or swept that could potentially harbor dirt, dust and germs. Wooden floors were torn out in favor of tiles, or better yet, a relatively new material made from cotton scrim with oxidized linseed oil and cork dust called “linoleum.” Lighter textiles like linen supplanted heavy drapery because they were not only easier to wash, but also let in more air and sunlight, design historian Alessandra Wood says. “If you were putting up drapery, linen is something that’s better to choose than the heavier textiles — so ventilation is key here too,” she says.

As influenza raged, homeowners added a small half-bathroom — also known as a “powder room” — on the ground floor of a house near the entrance.

Wallpaper also became a target for sanitary crusaders in the late 19th century, according to Bo Sullivan, a historian specializing in American residential architecture and decor from 1870 to 1970 and owner/founder of Arcalus Period Design in Portland, Oregon. First, there was a growing awareness that arsenic — used in distemper paints for wallpapers — was poisoning a room’s occupants, thanks to the 1874 book Shadows from the Walls of Death, Sullivan says.

In addition, there was an ever-increasing focus on the “unhealthiness” of dirty and sometimes damp layers of wallpaper that was not designed to be cleaned. “Wallpaper was gone, and walls became white,” Alter says. “White became all the rage because you wanted to reflect sunlight… because light was considered to be the best disinfectant.”

According to Kelly Wright, who teaches American history at the University of Cincinnati and specializes in the historic use of color in architecture, one of the reasons 19th century wallpaper was so heavily patterned was that flies were so prevalent in homes at the time: The busyness of the walls helped mask the flies and related stains. As sanitation became more of a consideration, easily cleaned white tiles or painted walls became more popular.

Bathroom fittings like soap dishes, toothbrush holders, towel bars, and cup holders were another key component of the ideal sterile look of home bathrooms. “There was a ‘laboratory’-type quality to early-20th-century bathrooms and kitchens … and nickel-plated brass bathroom fixtures play a large role in this,” Sullivan says. Nickel plating emerged in the 1880s as a high-end finish for door hardware that imitated silver, but by the 1890s it migrated into kitchens and bathrooms as a tarnish-free and easy-to-clean treatment for solid brass fittings. Like many other household products at the time, these fixtures wouldn’t have looked out of place in a hospital. The Art Brass Company of New York also sold their products under the name “San-o-la” to capitalize on this sanitary design craze. The San-o-la pieces weren’t just practical — their single-piece castings were easy to clean — they also featured a flowing style influenced by Art Nouveau, adding a bit of glamour to an otherwise plain and sterile space.

Concern over hygiene and the spread of infectious diseases also drove another design innovation: second bathrooms. In multi-story homes, bathrooms were typically located on the second floor, near the bedrooms. But as influenza outbreaks raged in the early 20th century, some homeowners added a small half-bathroom — also known as a “powder room” — on the ground floor of a house near the entrance. In an era of daily home deliveries of ice, coal and groceries, powder rooms gave delivery people or visitors the opportunity to wash their hands using an easily accessible sink, Wright says, instead of bringing germs from other people’s homes upstairs into the family’s personal quarters.

When architects designed homes in the wake of the 1918 flu pandemic and World War I, they typically took one of two approaches to the recent traumas. The first was to start at the ground-up and rethink everything, like Modernists and the Bauhaus did in the 1920s. The second — and far more common — tactic was to try to forget about the trauma and make ourselves comfortable, which bolstered the popularity of Art Deco design, according to Dianne Pierce, adjunct professorial lecturer in decorative arts and design history at the George Washington University.

In the bathroom, that style offered “cocooning and comfort and pleasure and sensuality,” she says: There are tile and geometric fixtures that are easily cleaned, but something else, too. “I think the motivation is more sensual,” she says. “It’s more about the thrill of being able to run hot water into a tub and have the comfort of a bath.”

But whether bathrooms constructed and designed in the interwar period were starkly minimalist or flashy Art Deco, the idea they had to be easily cleaned and as hygienic as possible remained — at least for a while. Once antibiotics became commonplace and design no longer had the responsibility of promoting disease avoidance, other trends emerged — see the popularity of carpeted ’70s bathrooms with fuzzy toilet seat covers.

What might that mean for the bathrooms of the post-coronavirus world? Americans have already demonstrated a keen fixation with this household feature: In the last 50 years, the number of home bathrooms per person has doubled. One could easily see the lavatory-building boom accelerate further as future homeowners keep the needs of the self-quarantined in mind. And many have speculated that sales of bidet attachments will surge as toilet-paper shortages encourage Americans to embrace this more sustainable alternative.

Once a semblance of normalcy returns, it will be interesting to see whether we respond to this trauma by trying to make ourselves more comfortable, or by implementing design features that make our homes and bodies easier to clean, or a combination of the two. “It’s the idea that we’ve been through this horrible trauma, and now we want to live our lives in a way that is just comfortable,” says Pierce.

Elizabeth Yuko is a bioethicist and journalist.