The department is administered by the United States secretary of the interior, who is a member of the Cabinet of the president. The current secretary is David Bernhardt, who previously served in the Department as deputy secretary. The inspector general position is currently held by Mary Kendall, who is serving as acting inspector general.[4][5]

A department for domestic concern was first considered by the 1st United States Congress in 1789, but those duties were placed in the Department of State. The idea of a separate domestic department continued to percolate for a half-century and was supported by presidents from James Madison to James Polk. The 1846–48 Mexican–American War gave the proposal new steam as the responsibilities of the federal government grew. Polk’s Secretary of the Treasury, Robert J. Walker, became a vocal champion of creating the new department.[citation needed]

In 1849, Walker stated in his annual report that several federal offices were placed in departments with which they had little to do. He noted that the General Land Office had little to do with the Treasury and also highlighted the Indian Affairs office, part of the Department of War, and the Patent Office, part of the Department of State. Walker argued that these and other bureaus should be brought together in a new Department of the Interior.[citation needed] A bill authorizing its creation of the department passed the House of Representatives on February 15, 1849, and spent just over two weeks in the Senate. The department was established on March 3, 1849 (9 Stat. 395), the eve of President Zachary Taylor’s inauguration, when the Senate voted 31 to 25 to create the department. Its passage was delayed by Democrats in Congress who were reluctant to create more patronage posts for the incoming Whig administration to fill. The first Secretary of the Interior was Thomas Ewing.

Early and later years of the department[edit]

As of mid-2004, the department managed 507 million acres (2,050,000 km²) of surface land, or about one-fifth of the land in the United States. It manages 476 dams and 348 reservoirs through the Bureau of Reclamation, 410 national parks, monuments, seashore sites, etc. through the National Park Service, and 544 national wildlife refuges through the Fish and Wildlife Service.

Within the Interior Department, the Bureau of Indian Affairs handles some federal relations with Native Americans, while others are handled by the Office of Special Trustee. The current acting assistant secretary for Indian affairs is Lawrence S. Roberts, an enrolled member of the Oneida Tribe in Wisconsin.

The department has been the subject of disputes over proper accounting for Native American Trusts set up to track the income and distribution of monies that are generated by the trust and specific Native American lands, which the government leases for fees to companies that extract oil, timber, minerals, and other resources. Several cases have sought an accounting of such funds from departments within the Interior and Treasury (such as the Minerals Management Service), in what has been a 15-year-old lawsuit. Some Native American nations have also sued the government over water-rights issues and their treaties with the US. In 2010 Congress passed the Claims Settlement Act of 2010 (Public Law 111-291), which provided $3.4 billion for the settlement of the Cobell v. Salazar class-action trust case and four Native American water rights cases.[8]

The $3.4 billion will be placed in a still-to-be-selected bank and $1.4 billion will go to individuals, mostly in the form of checks ranging from $500 to $1,500. A small group, such as members of the Osage tribe who benefit from huge Oklahoma oil revenues, will get far more, based on a formula incorporating their 10 highest years of income between 1985 and 2009. As important, $2 billion will be used to buy trust land from Native American owners at fair market prices, with the government finally returning the land to tribes. Nobody can be forced to sell.[9] 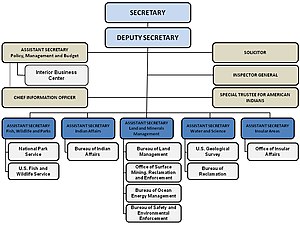 The hierarchy of the U.S. Department of the Interior.

Secretary of the Interior Albert B. Fall was implicated in the Teapot Dome scandal of 1921. He was convicted of bribery in 1929, and served one year in prison, for his part in the controversy. A major factor in the scandal was a transfer of certain oil leases from the jurisdiction of the Department of the Navy to that of the Department of the Interior, at Fall’s behest.

Secretary of the Interior James G. Watt—already facing criticism related to his alleged hostility to environmentalism and his support of the development and use of federal lands by foresting, ranching, and other commercial interests, and for banning The Beach Boys from playing a 1983 Independence Day concert on the National Mall out of concerns of attracting “an undesirable element”—resigned abruptly after a September 21, 1983, speech in which he said about his staff: “I have a black, a woman, two Jews and a cripple. And we have talent.”[10] Within weeks of making this statement, Watt submitted his resignation letter.[10][11]

Under the Administration of President George W. Bush, the Interior Department’s maintenance backlog climbed from $5 billion to $8.7 billion, despite Bush’s campaign pledges to eliminate it completely. Of the agency under Bush’s leadership, Interior Department Inspector General Earl Devaney has cited a “culture of fear” and of “ethical failure.” Devaney has also said, “Simply stated, short of a crime, anything goes at the highest levels of the Department of Interior.”[12]